Some of the ground Rich covers

Today at its headquarters in Palo Alto, Facebook and a collection of partners such as Dell, Intel and AMD  — as well as kindred spirits like RackSpace’s founder (the company behind OpenStack) and the CIO of the Department of Energy — are on hand to reveal the details behind Facebook’s first custom-built data center and to announce the Open Compute project.

The big message behind Facebook’s new data center, located in Prineville Oregon, is one of efficiency and openness.  The facility will use servers and technology that deliver a 38 percent gain ìn energy efficiency.  To bring the knowledge that the company and its partners have gained in constructing this hyper-efficient hyper-scale data center Facebook is announcing the Open Compute project.

Much the way open source software shares the code behind the software, the Open Compute project has been created to provide the specifications behind the hardware.  As a result, Facebook will be publishing the specs for the technology used in their data center’s servers, power supplies, racks, battery backup systems and building design.  By releasing these specs, Facebook is looking to promote the sharing of data center and server technology best practices across the industry.

How does Dell fit in?

Dell, which has a long relationship with Facebook, has been collaborating on the Open Compute project.  Dell’s Data Center Solutions group has designed and built a data center solution using components from the Open Compute project and the server portion of that solution will be on display today at Facebook’s event.  Additionally Forrest Norrod, Dell’s GM of server platforms will be a member of the panel at the event talking about the two companies’ common goal of designing the next generation of hyper efficient data centers.

A bit of history

Dell first started working with Facebook back in 2008 when they had a “mere” 62 million active users.  At that time the three primary areas of focus in with regards to the Facebook IT infrastructure were:

Over the last three-plus years, as Facebook has grown to over 500 million active users, Dell has spefically helped out to address these challenges by:

Congratulations Facebook! And thank you for focusing on both open sharing and on energy efficiency from the very beginning!

This week, outside of Frankfurt, WorldHostingDays is taking place.  A whole delegation of folks from the Data Center Solutions group is there to support the announcement of our new microserver line.   A lot of our key partners are there as well.  One such partner is AMD.

Earlier today, AMD director of product marketing John Fruehe held a session entitled “Core Scalability in a cloud environment.”  Above is a three minute section where John talks about the three AMD-based systems that are part of the PowerEdge C line:

Take a listen as John walks you through the products and their use cases.

A Walk-thru of our new Hyper-scale inspired Microserver

Earlier this morning at WorldHostingDays outside of Frankfurt, we announced our new line of PowerEdge C microservers.  While this is our third generation of microservers, its the first that are available beyond the custom designed systems we’ve been building for a small group of hyperscale web hosters.

If you’re not familiar with microservers, their big appeal is that they are right-sized for many dedicated hosting applications and provide extreme density and efficiency, all of which drive up a data center’s revenue per square foot.  As an example, our first generation allowed one of France’s largest hosters, Online.net to efficiently enter a new market and gain double digit market share.

Over the past three years Dell’s Data Center Solutions group has been designing custom microservers for a select group of web hosters.  The first generation allowed one of France’s largest hosters, Online.net to enter a new market and gain double digit market share.  The second generation brought additional capabilities to the original design along with greater performance.

Today we are announcing that we are taking our microserver designs beyond our custom clients and are making these systems available to a wider audience through our PowerEdge C line of systems.  The PowerEdge C5125 and C5220 are ultra-dense 3U systems that pack up to twelve individual servers into one enclosure.  The C5125, which is AMD based, will be available next month and the Intel-based C5220 will be available in May.

The PowerEdge C5125 with one of the 12 server sleds pulled out.

So what the heck is a “microserver”

Microservers are a new class of systems specifically designed for those use cases where multi-core CPU architecture and extensive virtualization are overkill.  What they provide instead are multiple low-cost dedicated servers, each featuring a single-socket CPU, where one CPU is perfect for running single applications.

The general idea behind these lighter weight systems is that they are right-sized for a particular set of applications such as serving up Web pages, streaming video and certain online gaming services.

One of the most important attributes of the PowerEdge C5125 and C5220 is their density.  By packing 12 one-socket servers in a 3U form factor these systems deliver four times the density of more conventional 1U servers.  This translates to four times less floor space, cabling and racks all of which means greater revenue per square foot for web hosters and data center operators.

These systems further save on power and cooling by leveraging shared infrastructure.  The server nodes in the chassis share mechanicals, high-efficiency fans and redundant power supplies all of which helps it save up to 75% in cooling costs compared to typical 1U servers. 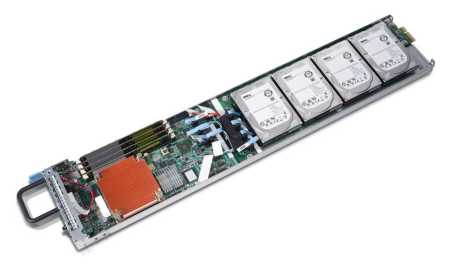 So if power, cooling and revenue per square foot are somethings you are concerned with or you are looking to provide dedicated hosting to your customers of lighter weight applications you just might find the PowerEdge C microserver systems something you want to take a closer look at :).

The last couple of Dell Data Center Solutions offerings I’ve talked about, Viking and MDC, have been from the custom side of the house.  Both of these solutions are targeted specifically at a few select large customers.

The subject of today’s post however, the PowerEdge C6105 server, is available to anyone running a scaled out environment.  It, alongside the recently available C410X expansion chassis, represent the latest additions to the PowerEdge C line that we launched back in March.

Efficiency is its middle name

Designed to maximize performance per watt per dollar, the C6105 is ideal for energy and budget constrained scale-out environments.  Targets include: Scale-out Web 2.0, hosting, and HPC applications where core count and power efficiency are the priority.

Want a closer look? Click below and product manager Steve Croce will give you a quick overview.

Some of the points Steve touches on:

Last night, as a lead in to today’s Structure conference, there were two events scheduled here in San Francisco.  The first was a cocktail party hosted by AMD.  The second was a private dinner hosted by GigaOM where each of the sponsors got to send a representative.

Here are some pictures from the two events. 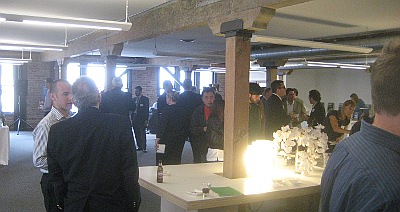 The AMD cocktail party was held in a very cool space. Here it is not long after it opened.

We showed off some of our AMD-based custom systems.

Before long the party was packed (and hot).

I decided to walk from the party to the dinner. The restaurant, the Waterbar, was right under the Bay Bridge.

A bow and arrow along the way. 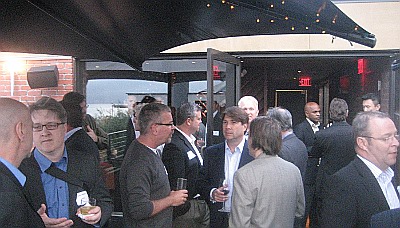