A walk thru Facebook’s HQ on Open Compute day

Last Thursday a group of us from Dell attended and participated in the unveiling of Facebook’s Open Compute project.

Much the way open source software shares the code behind the software, the Open Compute project has been created to provide the specifications behind the servers and the data center.    By releasing these specs, Facebook is looking to promote the sharing of data center and server technology best practices across the industry.

Words of wisdom on the wall. 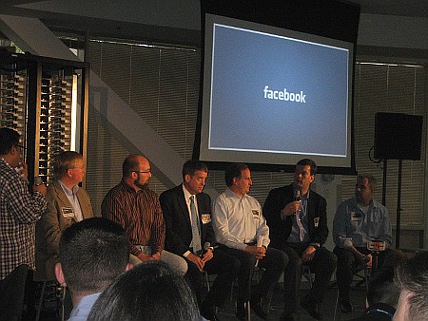 The panel moderated by Om Malik that closed the event. Left to right: Om, Graham Weston of Rackspace, Frank Frankovsky of Facebook, Michael Locatis of the DOE, Alan Leinwand of Zynga, Forrest Norrod of Dell (with the mic) and Jason Waxman of Intel.

Post-event show & tell: Drew Schulke of Dell's DCS team being interviewed for the nightly news and showing off a Dell DCS server that incorporates elements of Open Compute.

This entry was posted on Tuesday, April 12th, 2011 at 9:01 pm and is filed under Uncategorized. You can follow any responses to this entry through the RSS 2.0 feed. You can leave a response, or trackback from your own site.