HackDFW and the project Sputnik story

[Notice: Previously I mistakenly noted that this event was hosted by MLH when, while it was part of the MLH season, was the result of the hard work and effort by a team of students from UTD, SMU, and UNT.]

Last week I attended HackDFW, a student hackathon in Dallas put on by  an intrepid group of local students from UTD, SMU, and UNT.   The hackapalooza, which was part of the Major League Hacking season, was a 24-hour event featuring students from around the country.  Besides getting to go around and talk to the students during the event I was fortunate enough to be asked to give the closing keynote.

I presented on Project Sputnik and how we crowd-sourced the development of a developer laptop.  Here are the slides I presented.

The Judges and Winner

After the preliminary judging, seven teams presented to impressive panel of judges with included, among others, Mark Cuban, the CEO of American Airlines and the Mayor of Dallas.

The winning team used Oculus Rift which connected to engine that rendered an ever evolving world of dinosaurs.   This would allow students to get a feel for the enormity of the dinosaurs and watch them as they grew and die from disease and predators

Here a few pics from the event.

Looking down on one of the groups 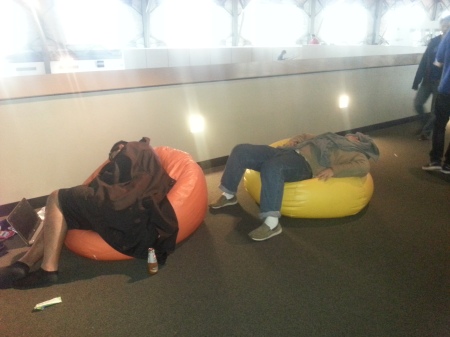