A little over a week ago, Dell’s Data Center Solutions (DCS) group marked its fifth birthday.  As Timothy Prickett Morgan explains in his article subtitled, “Five years old, and growing like a weed”:

This team, which now represents a greater than $1 billion dollar business and has expanded beyond just custom systems to include standard systems built for the “next 1000,”  all started on a simple napkin. 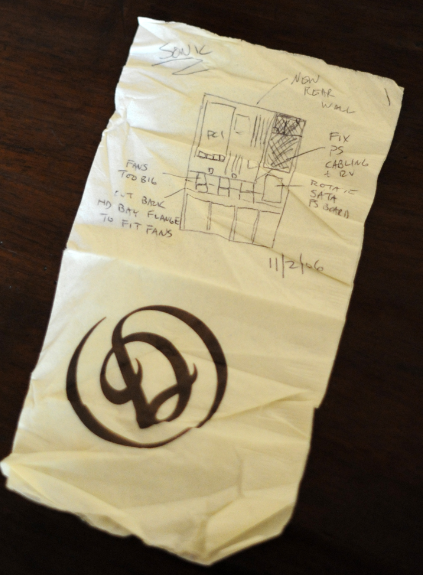 From napkin to “Frankenserver,” to today

Ty Schmitt who was one of the original team and now is the executive director of Dell’s modular infrastructure team within DCS, explains:

This was sketch I made over drinks with Jimmy Pike late one night after visiting a big customer on the west coast.  We we were working on a concept for a 1U system for them based on their requested requirements.   As you can see by the date (Nov 2006) it was actually before DCS became official … we were a skunk works team called “Sonic” consisting of a hand full of people.   We wanted to take an existing chassis and overhaul it to fit 4 HD’s, a specific MB, and SATA controller.  When we got back to Austin, I modified the chassis in the RR5 machine shop (took parts from several different systems and attached them together) and Jimmy outfitted it with electronics, tested it, and it was sent to the customer as a sample unit.

This first proto was described by the customer as “Frankenserver” and was the beginning of the relationship we have with one of our biggest customers.

A little over five years later, Dell’s DCS team has gone from Frankenserver to commanding 45.2 percent revenue share in a market that IDC estimates at $458 million in sales last quarter.  Pretty cool.

This entry was posted on Wednesday, April 11th, 2012 at 12:12 pm and is filed under Uncategorized. You can follow any responses to this entry through the RSS 2.0 feed. You can leave a response, or trackback from your own site.