Recently an announcement was made that took a lot of people by surprise.  Canonical and Microsoft announced that Ubuntu was now able to run on the Windows desktop.

Dustin Kirkland was the main man on the Canonical side who drove this.  I caught up with Dustin at the OpenStack summit to learn more about this seemingly strange move by Microsoft.

Some of the ground Dustin covers

Where LXD fits within the virtualization and container landscape — OpenStack Summit

Yesterday here at the OpenStack summit here in Austin I caught a few of the sessions in the track that Canonical was hosting.  One of the sessions dealt with Canonical’s LXD and where it fits into the whole virtualization/container space.

The talk was given by Dustin Kirkland and after he had finished, I grabbed him to explain the basics of LXD and the landscape it fits within.

Some of the ground Dustin covers:

Last night we  held our first SXSW meet up at Opal Divines.  Opals is very close to the worldwide headquarters of Gazzang, which last week was named by GigaOm one of The 10 Austin startups you need to meet at SXSW 2012.  Gazzang focuses on securing your data in the cloud via transparent data encryption.

Given the  proximity and the promise of free beer, I was able to twist the arms of four members of their development team and get them to join us.  Here is a quick video featuring Dustin Kirkland, Sergio Pena, Hector Acosta, and Eddie Garcia.

Today when I was walking the floor at the Cloud Expo here in New York, I ran into fellow Austinite Dustin Kirkland.  Dustin is the manager for systems integration team for Ubuntu.  I got Dustin to give me the low down on the most recent UDS (Ubuntu Developer Summit) that concluded a few weeks ago in Budapest:

Some of the ground that Dustin covers

At Austin Cloud Camp on Saturday I ran into Ubuntu linux developer and Canonical employee, Dustin Kirkland.  Dustin is on the server developer team at Canonical and, as he explains it, focuses on various aspects of virtualization, the plumbing layer below cloud computing.  I grabbed Dustin for a few minutes and chatted with him about last week’s release and what he’s been working on.

Some of the topics Dustin Tackles:

Update: And on a related note — Eucalyptus goes commercial with $5.5M funding round 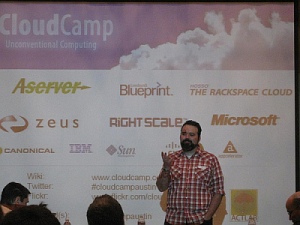 Michael Cote of Redmonk welcomes us all. (credit Dave Nielsen)

This past Saturday, Cloud Camp Austin was held down on the UT campus.  There was a very healthy turnout and a lot of great discussions were generated.

After opening salutations, camp got underway with a series of six five-minute lightening talks delivered by the camp’s gold sponsors.

From there, Dave Nielsen, the man who originally developed the cloud camp format (and who took most of the pictures in this post — see them all), guided us through the process of coming up with topics for session discussions.  That process, appropriately enough given that this was an unconference, began with an “unpanel.”

The Unpannel: Michael Wilde of Splunk, (not sure), Dustin from Canonical, Cote, myself (credit Dave Nielsen)

The way it worked was the room first brainstormed a list of topics they were interested in discussing/learning more about.  Anyone who thought they were an expert on one or more of these topics got to get up from their seats and form a five person panel at the front of the room.   Each member of the panel then answered two questions from the board and as the question was answered the audience was asked if the topic had been covered by the answer or if it warranted further discussion in an afternoon session 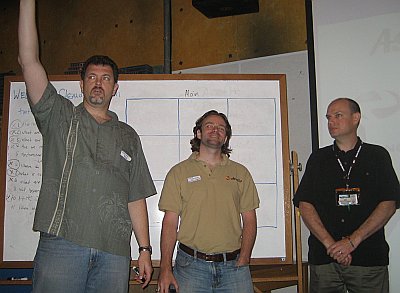 (L->R) Dave Nielsen leads us through our unconference set up. Canonical's Dustin Kirkland and hero-for-hire John West lend a hand.

A Schedule is Born

After the panel, as a group we all decided what the final sessions would be and who would lead them.  To lead a session you could either be knowledgeable in the area or completely clueless but wanted to learn about it.

The completed schedule: three sessions ran at a time and there were three time slots (credit Dave Nielsen)

While at camp I did a couple of video interviews, one with Dustin Kirkland of Canonical and one with Todd Morey of Mosso/Rackspace.  I should be posting those in the next few days.  I also found myself on the other end of the microphone being interviewed by Mr. Cote.  That should be appearing in the near distant future on his blog.